The Message of Divine Mercy

The message of The Divine Mercy is simple. It is that God loves us – all of us. And, he wants us to recognize that His mercy is greater than our sins, so that we will call upon Him with trust, receive His mercy, and let it flow through us to others. Thus, all will come to share His joy.  The Divine Mercy message is one we can call to mind simply by remembering ABC:

A - Ask for His Mercy. God wants us to approach Him in prayer constantly, repenting of our sins and asking Him to pour His mercy out upon us and upon the whole world.

B - Be merciful. God wants us to receive His mercy and let it flow through us to others. He wants us to extend love and forgiveness to others just as He does to us.

This message and devotion to Jesus as The Divine Mercy is based on the writings of Saint Faustina Kowalska, an uneducated Polish nun who, in obedience to her spiritual director, wrote a diary of about 600 pages recording the revelations she received about God's mercy. Even before her death in 1938, the devotion to The Divine Mercy had begun to spread.   The message and devotional practices proposed in the Diary of Saint Faustina and set forth here and other publications of the Marians of the Immaculate Conception are completely in accordance with the teachings of Church and are firmly rooted in the Gospel message of our Merciful Savior. Properly understood and implemented, they will help us grow as genuine followers of Christ. 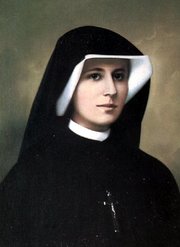 Although these means of receiving God’s mercy are new in form, they all proclaim the timeless message of God’s merciful love. They also draw us back to the great Sacrament of Mercy, the Holy Eucharist, where the living Lord, who suffered and died on the Cross and whose Heart was pierced with a lance, pours forth His mercy on all mankind, and grants pardon to all who draw near and honor Him. As Jesus told St. Faustina:
​
My Heart overflows with great mercy for souls, and especially for poor sinners…[I]t is for them that the Blood and Water flowed from My Heart as from a fount overflowing with mercy. For them I dwell in the tabernacle as King of Mercy. (Diary, 367)

Forgiving his would-be assassin
Pope John Paul II, both in his teaching and personal life, strove to live and teach the message of Divine Mercy. As the great Mercy Pope, he wrote an encyclical on Divine Mercy:  "The Message of Divine Mercy has always been near and dear to me… which I took with me to the See of Peter and which it in a sense forms the image of this Pontificate."

In his writings and homilies, he has described Divine Mercy as the answer to the world’s problems and the message of the third millennium. He beatified and canonized Sr. Maria Faustina Kowalska, the nun associated with the message, and he did it in Rome and not in Poland to underscore that Divine Mercy is for the whole world.

Establishing Divine Mercy Sunday for the Entire ChurchWhen Pope John Paul canonized Sr. Faustina (making her St. Faustina), he also, on the same day, surprised the entire world by establishing Divine Mercy Sunday (the feast day associated with the message) as a feast day for the entire Church. The feast day falls on the Second Sunday of the Easter season. On that day, Pope John Paul II declared, "This is the happiest day of my life."

Entrusting the World to Divine Mercy

In 2002, the Pope entrusted the whole world to Divine Mercy when he consecrated the International Shrine of The Divine Mercy in Lagiewniki, a suburb of Krakow in Poland. This is where St. Faustina’s mortal remains are entombed. The saint lived in a convent nearby. The Pope himself remembers as a young man working in the Solvay Quarry, just a few meters from the present-day Shrine. He also says that he had been thinking about Sr. Faustina for a long time when he wrote his encyclical on Divine Mercy. Further, the Holy Father has frequently quoted from the Diary of Saint Maria Faustina Kowalska and has prayed The Chaplet of The Divine Mercy at the saint’s tomb.

Beyond the Life of John Paul II

Given all these connections to Divine Mercy and St. Faustina, is it any wonder that Pope John Paul II died on the Vigil of Divine Mercy Sunday (the evening before the feast day), which fell that year on April 3rd?.   It is also no surprise that the Great Mercy Pope left us a message for Divine Mercy Sunday, which was read on the feast day by a Vatican official to the faithful in St. Peter’s after a Mass that had been celebrated for the repose of the soul of the Pope.
​
Repeatedly Pope John Paul II has written and spoken about the need for us to turn to the mercy of God as the answer to the specific problems of our times. He has placed a strong and significant focus on the Divine Mercy message and devotion throughout his pontificate that will carry the Church long after his death.

Chaplet of the Divine Mercy : How to Recite the Chaplet

The Chaplet of Mercy is recited using ordinary rosary beads of five decades. The Chaplet is preceded by two opening prayers from the Diary of Saint Faustina and followed by a closing prayer.

1. Make the Sign of the Cross:  In the name of the Father, and of the Son, and of the Holy Spirit. Amen.

2. Optional Opening Prayers:  You expired, Jesus, but the source of life gushed forth for souls, and the ocean of mercy opened up for the whole world. O Fount of Life, unfathomable Divine Mercy, envelop the whole world and empty Yourself out upon us.
Repeat the following three times: O Blood and Water, which gushed forth from the Heart of Jesus as a fountain of Mercy for us, I trust in You!

3. Our Father:  Our Father, Who art in heaven, hallowed be Thy name; Thy kingdom come; Thy will be done on earth as it is in heaven. Give us this day our daily bread; and forgive us our trespasses as we forgive those who trespass against us; and lead us not into temptation, but deliver us from evil, Amen.

4. Hail Mary:  Hail Mary, full of grace. The Lord is with thee. Blessed art thou amongst women, and blessed is the fruit of thy womb, Jesus. Holy Mary, Mother of God, pray for us sinners, now and at the hour of our death, Amen.

5. The Apostle's Creed:  I believe in God, the Father almighty, Creator of heaven and earth, and in Jesus Christ, His only Son, our Lord, who was conceived by the Holy Spirit, born of the Virgin Mary, suffered under Pontius Pilate, was crucified, died and was buried; He descended into hell; on the third day He rose again from the dead; He ascended into heaven, and is seated at the right hand of God the Father almighty; from there He will come to judge the living and the dead. I believe in the Holy Spirit, the holy catholic Church, the communion of saints, the forgiveness of sins, the resurrection of the body, and life everlasting. Amen.

6. The Eternal Father:  Eternal Father, I offer you the Body and Blood, Soul and Divinity of Your Dearly Beloved Son, Our Lord, Jesus Christ, in atonement for our sins and those of the whole world.

7. On the Ten Small Beads of Each Decade, say:   For the sake of His sorrowful Passion, have mercy on us and on the whole world.

9. Conclude with Holy God (Repeat three times):  Holy God, Holy Mighty One, Holy Immortal One, have mercy on us and on the whole world.

​10. Optional Closing Prayer:   Eternal God, in whom mercy is endless and the treasury of compassion — inexhaustible, look kindly upon us and increase Your mercy in us, that in difficult moments we might not despair nor become despondent, but with great confidence submit ourselves to Your holy will, which is Love and Mercy itself.
Godsmessages4Us@yahoo.com
Proudly powered by Weebly